Twinke twinkle little star…how I wonder why you twinkle! To understand why stars twinkle (and planet’s don’t) all you need is a straw and glass of water.

When light travels from one medium (air) to another (water) it bends. This bending of light is called “refraction.” You can observe this bending by placing a straight straw in a jar of water. The straight straw will suddenly appear “bent” if seen from above as shown in the picture below. 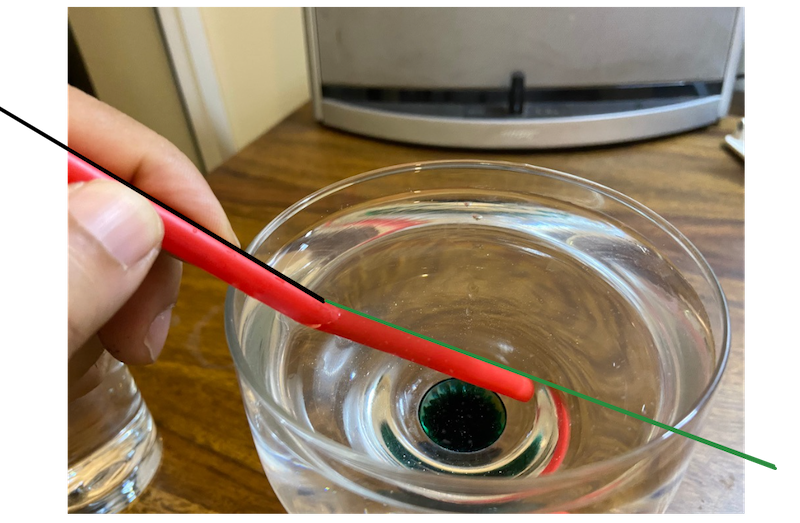 Here is a ray diagram of the setup. 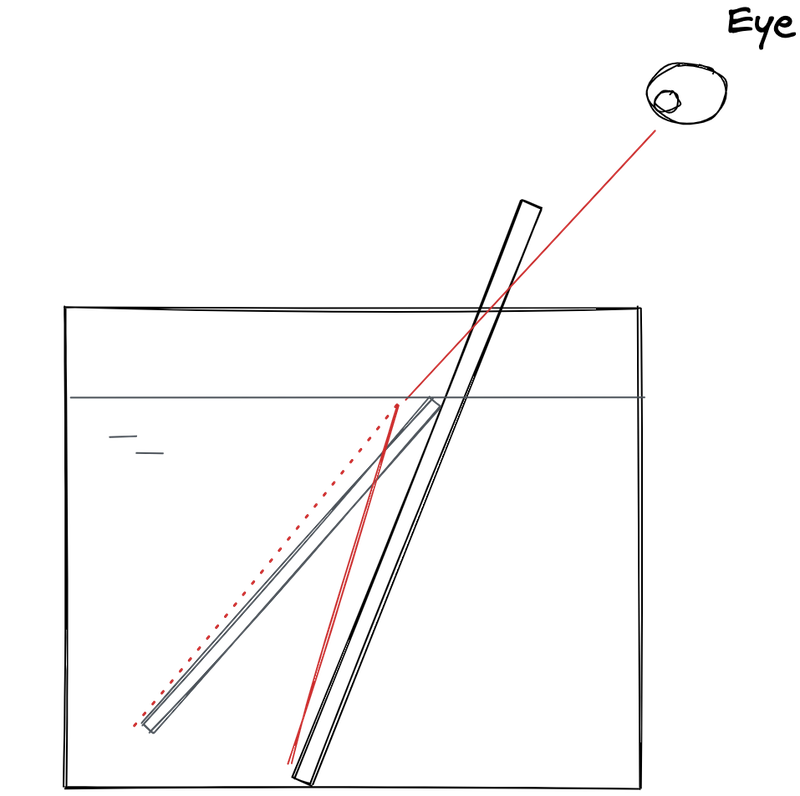 Light reflects from the straw and travels in a straight line till it hits the surface of the water. At the surface, it bends away, and as shown it hits the eye. The eye-brain cannot process this “bending” of light, and assumes the light is coming straight along the dotted line. It thinks the object is “there”, instead of the realizing the straw is actually somewhere else. This is what gives the “illusion” that the straw is bent.

Let’s see refraction from one more view point. If you place the straw vertical and around the middle of the glass, you will notice that although the straw looks fatter, it does not appear bent. 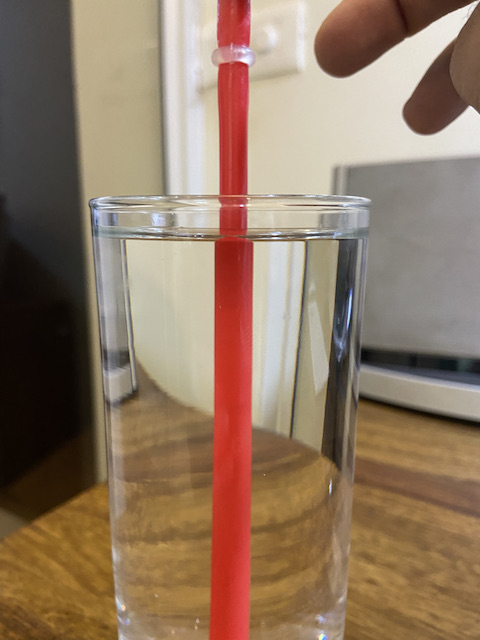 However, move it a little to the left and whoa - it looks broken! 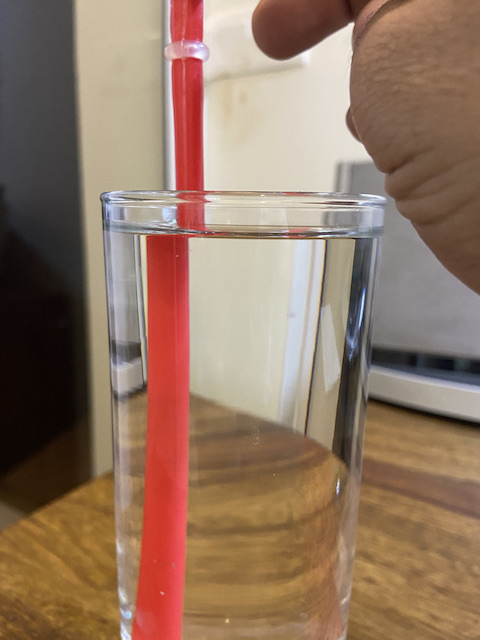 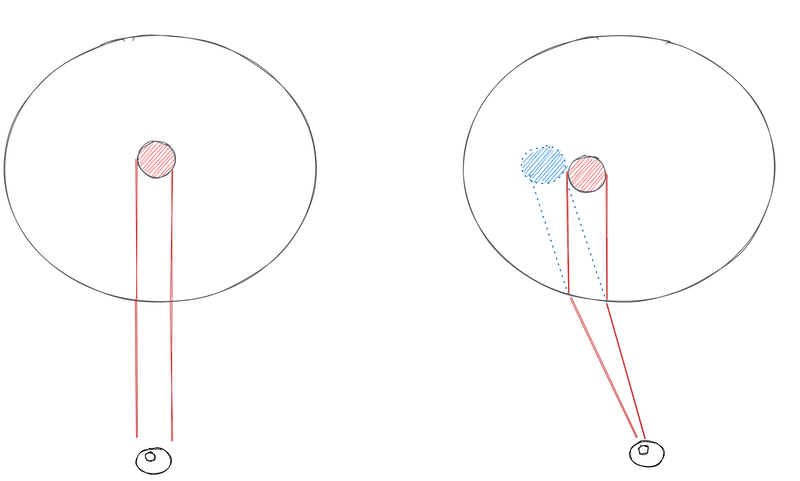 From the above ray diagram, it should be clear why the straw appears shifted under the water when it is placed to the left of the eye.

Now on to the experiment where you “see” the refraction of light directly, without having to rely on an external object like a straw.

A laser light is NOT a toy. If you stare directly into it, it will damage your retina and you will lose vision permanently. Make sure you have an adult with you when performing this experiment.

Fill the glass bowl with water and shine the laser light as shown below. You should see the ray of light bend. 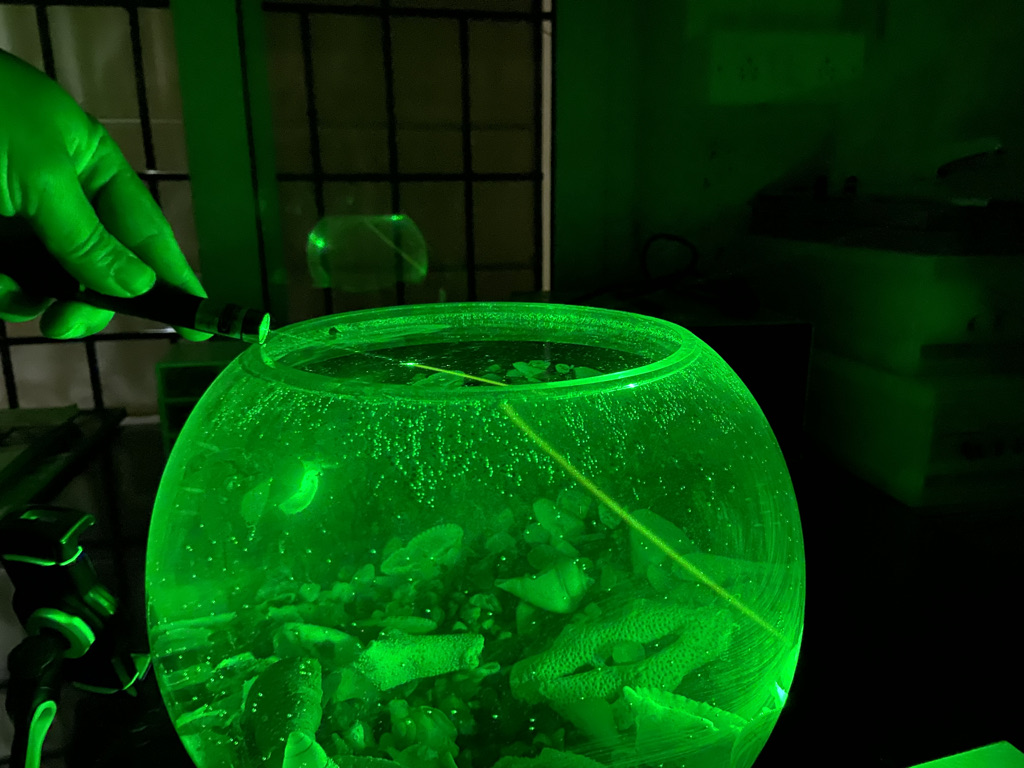 If you observe carefully, you will see two rays of light emerge at the point where the laser hits the surface of water. 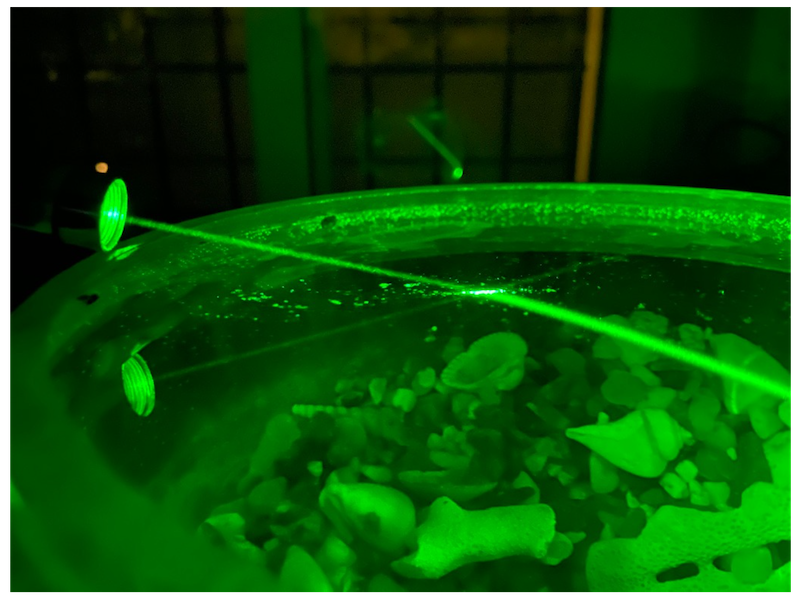 Your eyes are not tricking you; a part of the light is reflected, while most of it gets refracted. If you look, you will see the dot of the laser beam on the opposite wall and on the floor. 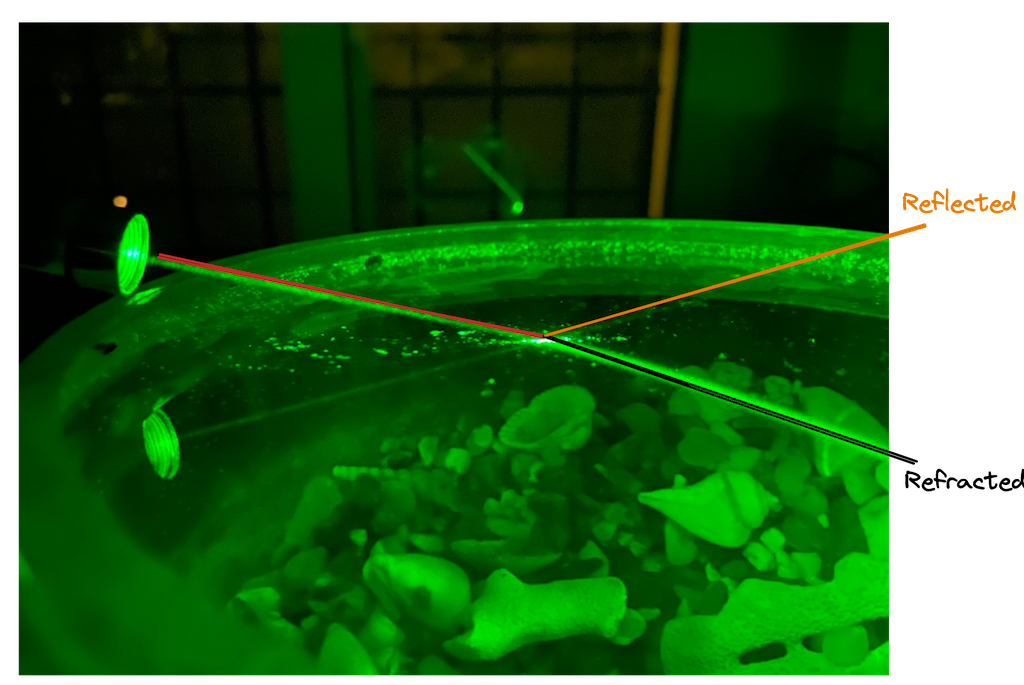 Why does light bend? That’s beyond the scope of this discussion, but here’s one way of thinking about it. When light enters water, it actually slows down. But light hates to be slowed down and tries to take the shortest path out of the water, so that it can go back to travelling as fast as it can. 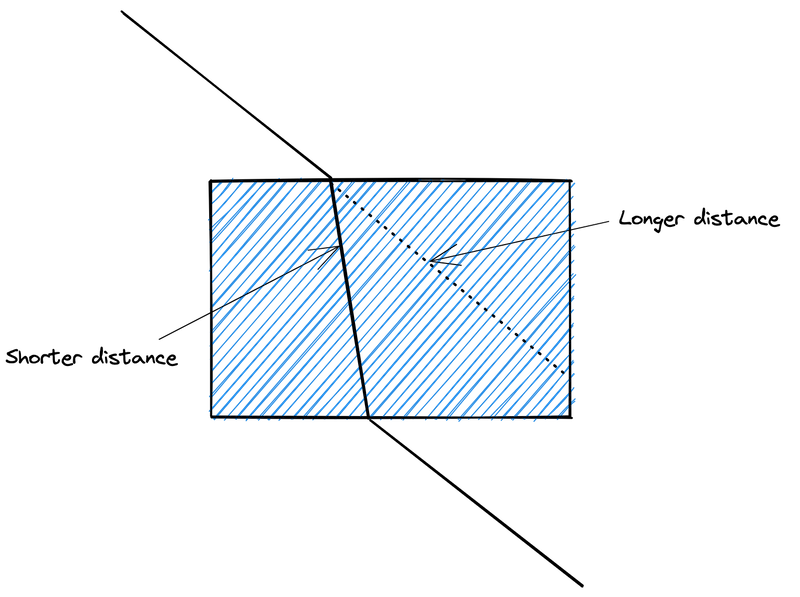 Many things in nature are caused due to refraction. 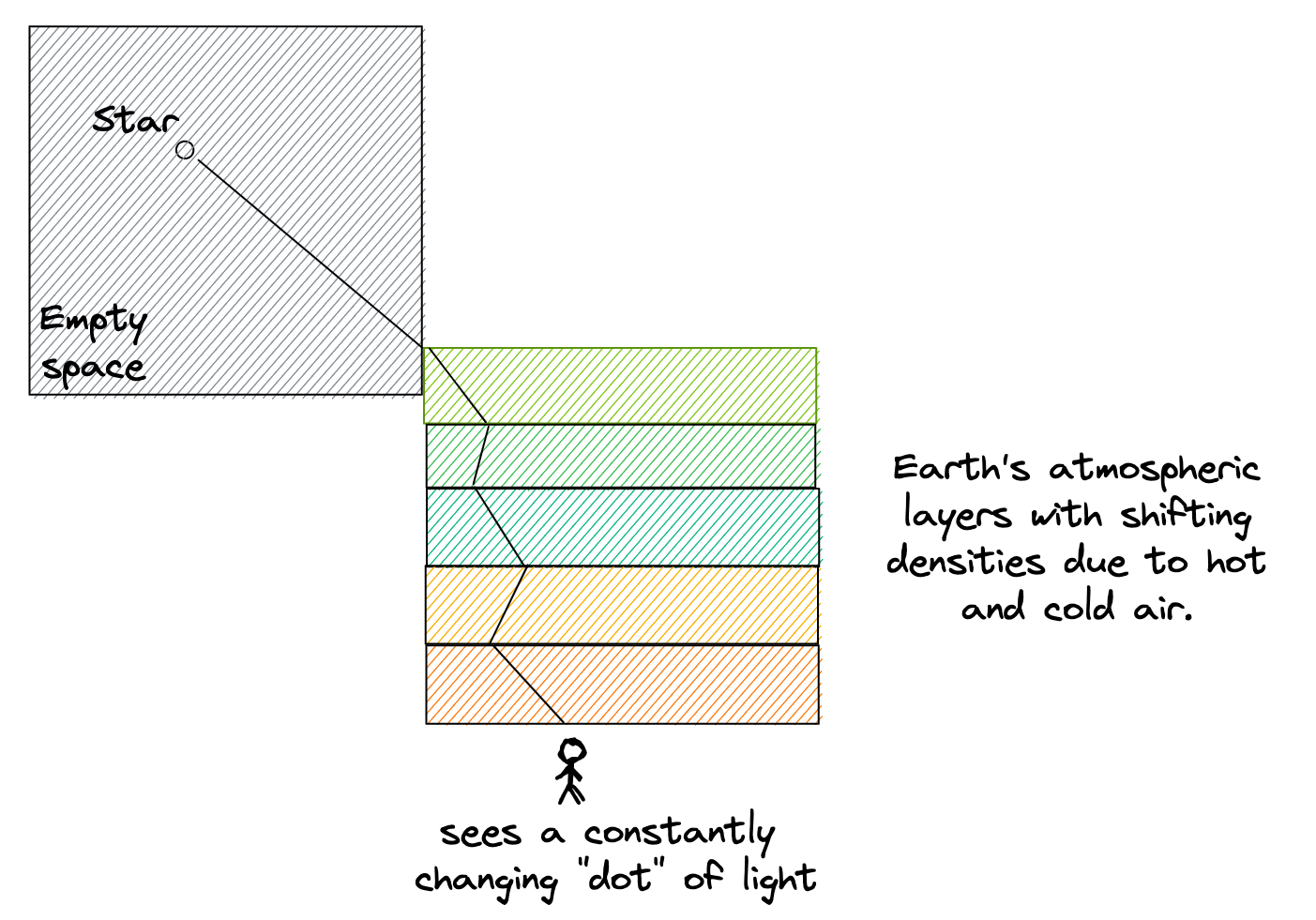 Stars are so far away that the light that comes from them appear like originating from a point. This light, when it enters the Earth’s atmosphere bends due to refraction - remember, that light has now entered a new medium (from the vacuum of space to Earth’s outermost atmospheric layer). Now, a single bend in the path of light would not be enough to create a twinkle. However, the light bends several times as it enters deeper into the Earth’s atmosphere because of the different densities of each layer. It’s this constant up-down-left-right bending that eventually reaches our eye, and we perceive it as a twinkling light from the star. 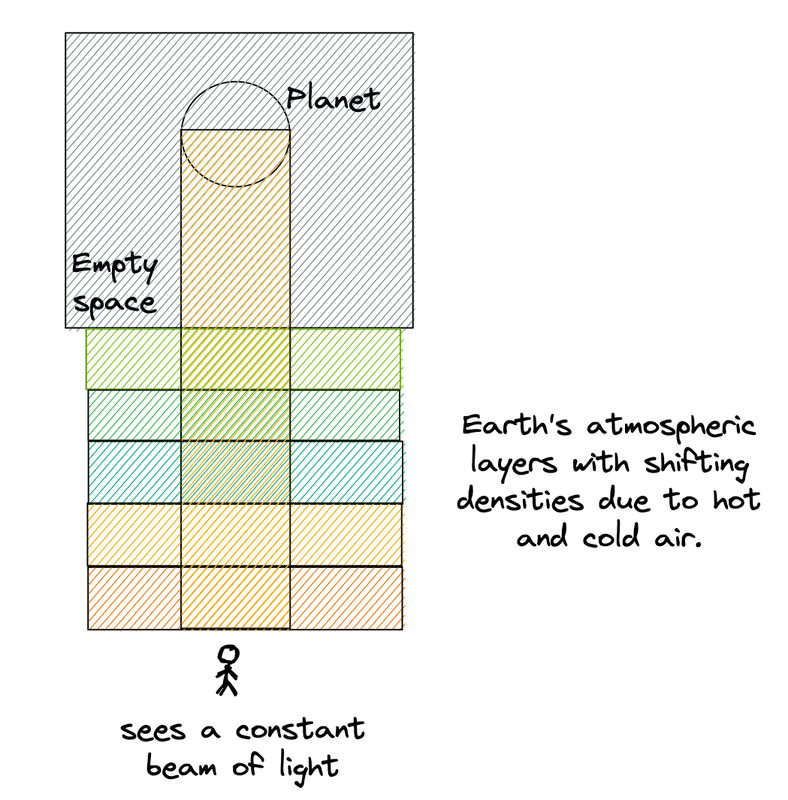 Planets, however, do not twinkle as much. They are much closer to Earth compared to the stars and light reflected to Earth is not a thin ray of light, but a thick beam. Within the beam, light continues to refract, however all those refractions cancel out, and the planet appears a steady dot to our eyes.

Rainbows in the Sky 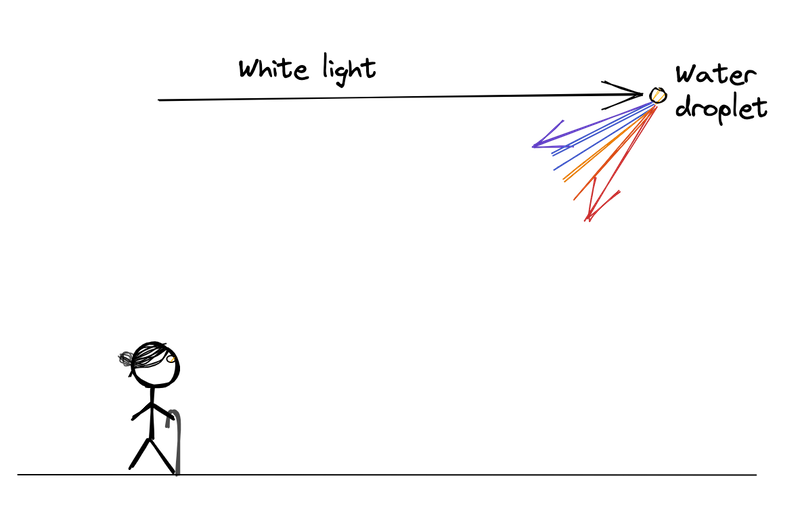 The more light slows down, the more it bends. Air is a lousy medium as it does not slow down light by much…just about 0.3 percent. But, put some water in the air, typically after rain, or in an area of constant mist like the Niagara falls, and that really slows down light. By almost 25%. The extreme bending exposes the different colors of light. Red bends the least, violet the most, and the rest of the colors bend somewhere in-between. 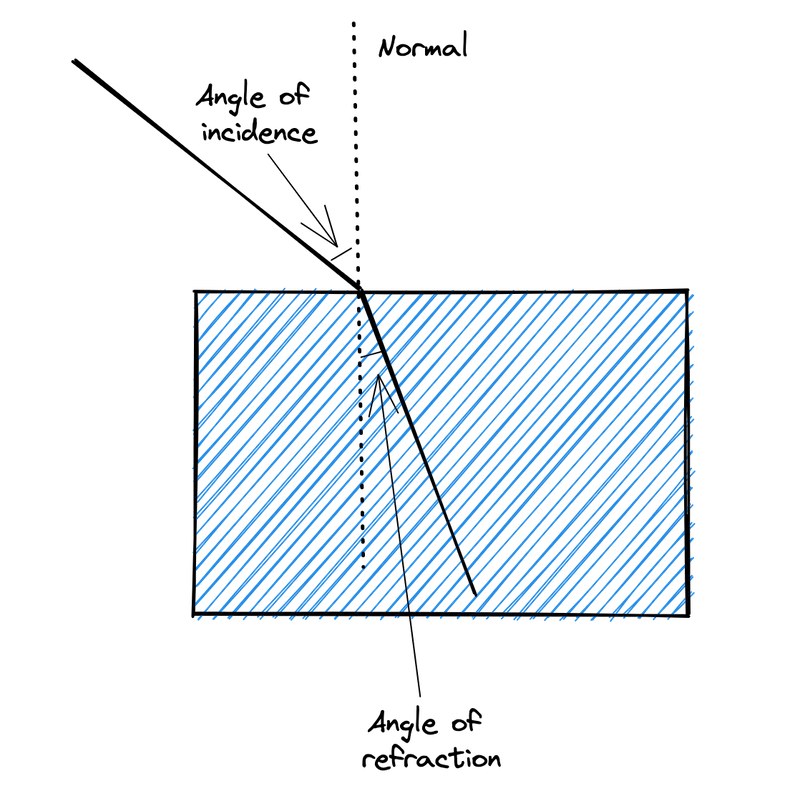