An element is something that cannot be split further into something that is simpler. For over a thousand years, the Universe was assumed to be made of four different elements - Fire, Earth, Air, and Water. Or so said Aristotle.

In 1800, a surgeon and a chemist conclusively proved that at least one of the above, Water, was not an element at all. In fact, they proved that water can be split into two things - Hydrogen and Oxygen. And they realized this quite by accident. They had recently got the specifications on how to make a voltaic pile (from a letter a Signor Volta sent to the Royal Society in London) and were “messing” around with it, when they realized that a tiny bit of gas was coming out a drop of water that was connected to their apparatus.

Soon they stuck the two ends of their voltaic pile in water, and the rest was history. One one end they noticed a steady stream of Hydrogen gas, and on the other, a clear few inches away, Oxygen gas.

Go back in time and do this experiment for yourself!

You need the following

Make two holes at the bottom of the container. You can use the soldering iron to make the holes. Stick the two graphite nodes from underneath and then seal the joints using the play dough. Wrap the rods with some wire and attach alligator clips to each end. Place the rubber bands across (as shown) so that the test tubes be placed inverted and upright.

Put the whole container on top of the cylindrical container (or use any other mechanism to make the main container stable) and start pouring in water. Make sure there is enough water between the top of the graphite rods and water level on top. Carefully insert the tubes in water, remove any air bubbles, and while the tube is still under water, place them over the graphite rods. Use the rubber bands to hold them in place.

Now connect the alligator clips to the 9V battery. You may not see any gas being generated. Wear your rubber gloves and carefully drop in some sodium hydroxide. You should see gases being generated in each of the test tubes. In one test tube, the gas generation happens rapidly, in the other, a bit less so.

You have split water. When you have collected enough gas, take the test tubes out, and verify that the gases are indeed Hydrogen and Oxygen.

How? Well, I’ll let you figure that out. 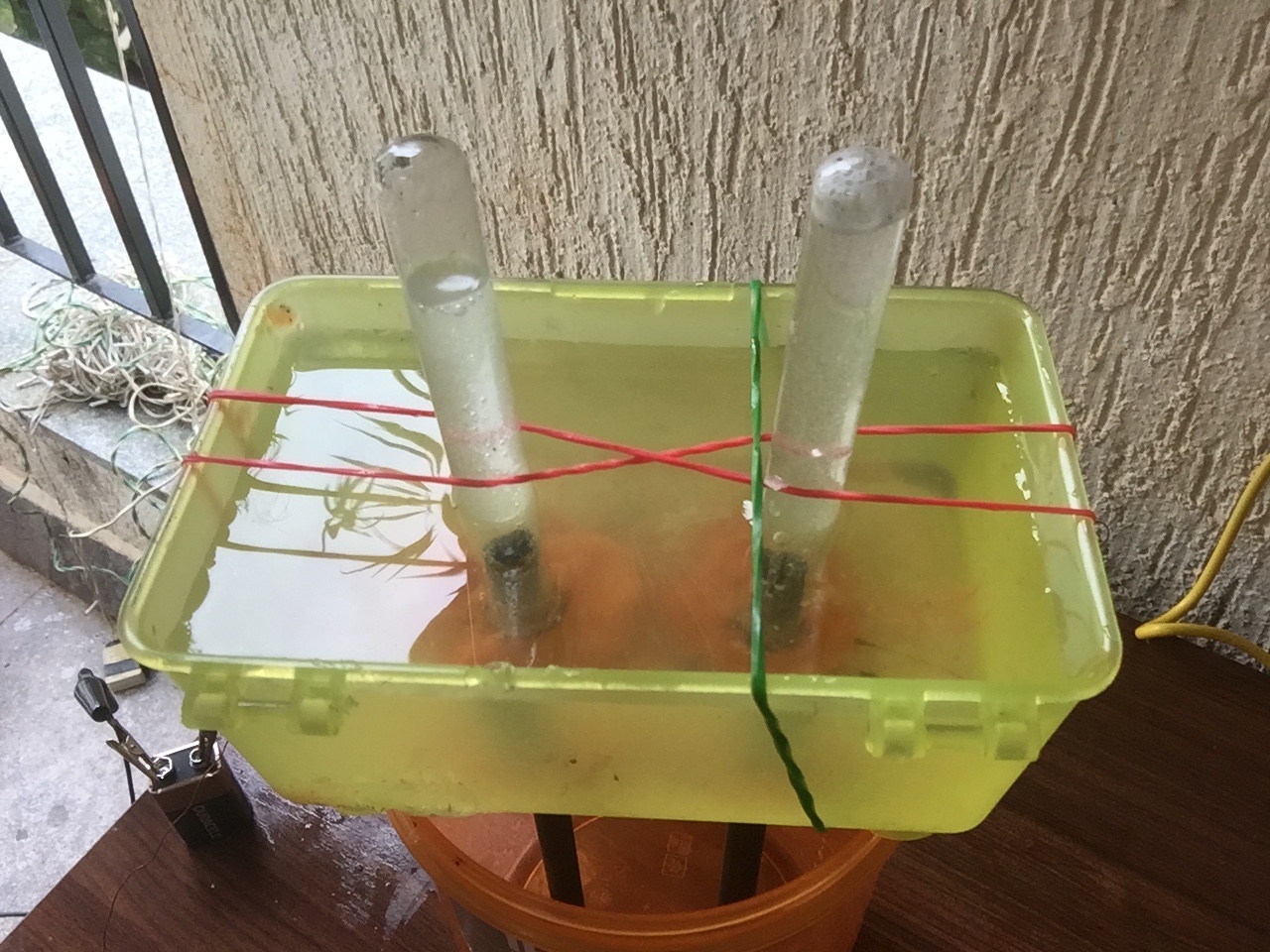 What happens if you try with different electrodes (instead of graphite)?

What happens if you add vinegar as the electrolyte?